The coconut palm is the most useful palm in the world. Every part of the tree is useful to human life for some purpose or the other. Hence, the coconut palm is endearingly called ‘kalpavriksha’ meaning the tree of heaven. The copra obtained by drying the kernel of coconut is the richest source of vegetable oil containing 65 to 70 per cent oil.

Sales of Coconut Products go Through the Roof

THE coconut craze has reached new heights, with health food retailers struggling to meet demands for the superfood trend, as consumers spend up big for coconut-derived waters, flours and dairy replacement products, despite the high saturated fat content.

Organic food retailer Deborah Wray reports that coconut water sales have tripled in the past six months, and her eight Wray Organic stores are unable to import enough coconut flour to keep up with customer demand.

There’s also strong demand for drinking coconuts and coconut milk-based beverages, yoghurts and ice cream. Coconut oil – used for nutritional and beauty reasons – sells for up to $32.95 per liter online, while coconut flour costs $15-20 per kg. Plantations International is in the right countries at the right time to profit from this surge in demand.

On an average, coconut yields 44 nuts/palm/year. However, under scientific cultivation West Coast Tall gives 80 nuts/palm/year in coastal Kerala and Karnataka. The hybrids yield 100-140 nuts/palm/year. On 1 hectare you can use precision farming and plant 1,000 trees.

An average well maintained plantation can get 100-400 coconuts per year, but for this example we at Plantations International will use 120 nuts per year X 1,000 trees =120,000 nuts per year.

The coconut can be grown on wide variety of soils. However, red sandy loam, alluvial, laterite and coastal sandy well-drained soils rich in organic matter and with a pH ranging from 5.0 to 8.0 are best for its growth and higher yield.

Site selection plays a major role in producing coconuts. Soil with a minimum depth of 1.2 to 1.5 meter and good water holding capacity should be selected for coconut cultivation. Soils with underlying hard rock or soils with water logging and poor drainage should be avoided. Clayey soils are not suitable for coconut production.

First and foremost, in any farming, size of the pit depends on the soil type and water table of the soil. In loamy soils, pits with size of 1 x 1 x 1 meter should be dug and filled with top soil to the height of 40 to 50 cm. In laterite soils, large pits are recommended and pits size of 1.2 x 1.2 x 1.2 meter should be dug and filled with loose soil, well rotten farm yard manure like cow dung and ash up to a depth of 55 to 60 cm before planting. For moisture conservation, 2 layers of coconut husk should be placed at the bottom of the pit with concave surface facing upwards while filling the pits. For prevention of termite attack, BHC 10 % DP should be sprinkled on the coconut husk. In-order to soften the hard pan of the soil, common salt of 2 kg per pit should be applied at least 6 months before the plantation.

Generally, a square system of planting is preferred with a spacing of 7.5 x 7.5 meter which will accommodate 178 coconut-palms per 1 hectare. However, a spacing of 7.0 to 10 meter is practiced in many coconut growing regions of the country.

Selection of quality seedlings is very important for better yield. Farmers should select vigorous coconut seedlings of 1 year old and having minimum of 10 cm at the collar level to plant in the farm land. Early splitting of leaves in the seedlings could be a factor of selecting good seedlings. In case of water logged areas, 18 months to 24 months old seedlings are preferred. The best planting season in coconut farming is May to June which is pre-monsoon time frame.

Propagation is done through seeds. Seedlings can be raised on nursery beds and transplanted in the main field. 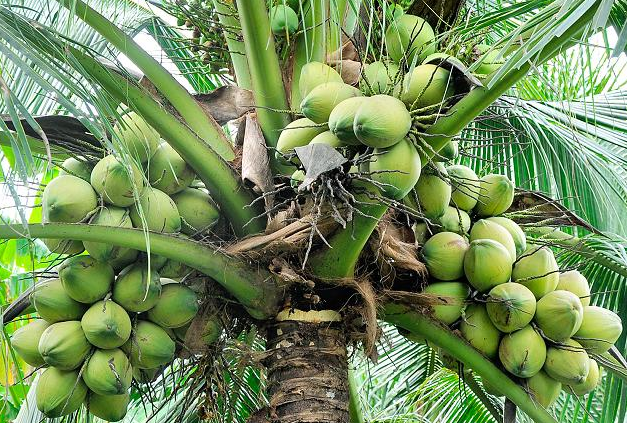 As part of inter-cultural operations, ploughing, digging and forming small mounds during the months of Aug-Sept and spreading them in the months of Dec to Jan should be carried out. Other beneficial operations are, making shallow basins with a radius of 2 meter before the onset of monsoon and filling them at the close of monsoon. In order to control the weeds, regular inter-cultural operations are advised. Mulching can be done at tree basins with dry hay to retain the moisture, control the weed growth and protect the soil from erosion.

Farmers can utilize the inter-space in the coconut palm orchard by cultivating crops like banana, ground nut (peanut),elephant foot yam, pineapple, sweet potato, chillies or any other vegetable and legume crops during initial 6 to 8 years period. In older plantation of coconut, cinnamon, cocoa, pepper and clove can be cultivated as mixed crops along with inter-crops. Mixed farming by growing fodder grasses such as guinea grass or hybrid napier found very and also supports the animal feed requirements.

Pruning activities like removing dried leaves or dead leaves or diseased leaves should be carried out regularly. Regular cleaning of the palm basins will check the weeds.

Pests and Diseases in Coconut Plantations/h3>
The following are the main pests and diseases found in coconut plantations.

Generally, coconut palms will be ready for harvesting in about 1 year after the opening of the spathe. Coconuts are harvested at different intervals based on the need. Usually coconuts are harvested at tender stage for coconut water purpose. The frequency of harvesting also depends on the yield of the palms. In well maintained orchards, coconut bunches are produced regularly and harvesting can be done once in a month. Coconut palms can yield up to 60 years and whose economic life is about 60 to 65 years.