Food Security is a Global Challenge

“ Food security, at the individual, household, national, regional and global levels [is achieved] when all people, at all times, have physical and economic access to sufficient, safe and nutritious food to meet their dietary needs and food preferences for an active and healthy life. ” 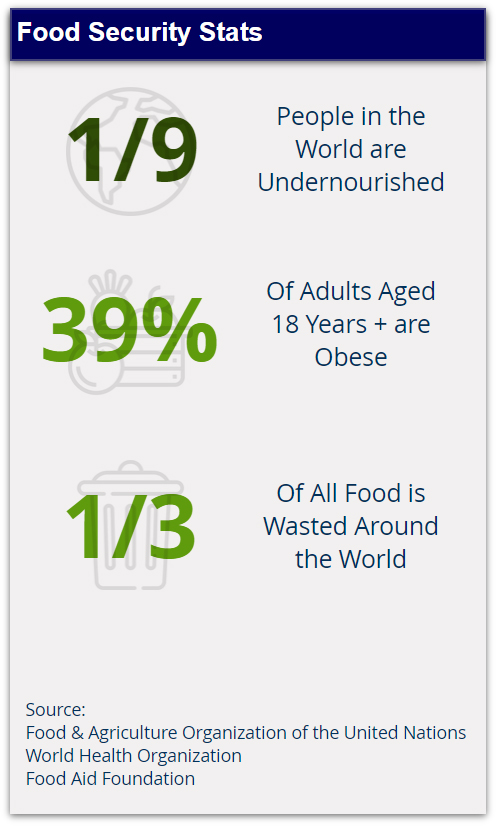 characterization. These include food affordability, food availability and accessibility, food quality and safety, and existing natural resources. The FAO and The Economist both measure food security on a country based on these indicators at varying degrees.

Food along with water and air is essential for human life. High levels of food security are necessary for human existence but is also imperative to global and country specific economic growth, stability and prosperity. For example, countries with poor level of food security often face chronic malnutrition which provides limitations in human capital development, which is required to achieve economic growth.

Furthermore, low levels of food security place significant stress on government expenditures. It forces governments to invest substantial resources in the short-term through social safety net programs and conditional cash transfers. It also increases their reliance on food imports which is detrimental to long term food self-sufficiency. The FAO has reported that high rates of malnutrition can lead to a GDP loss of as much as 4-5%.

Food security ought to be a priority for all countries, whether developing or developed. Although low levels of food security are commonly associated with poverty stricken countries they are also found in affluent developed countries as well. Food security rankings despite providing a decent gauge of performance are not without limitations. For example, some of wealthiest countries logically fare well in overall rankings as they have the capability and infrastructure to provide accessible, healthy food to their populations. Yet these high rankings dangerously mask their poor natural resources and resilience rank which measures food import dependency to a small degree. This raises the question, how can a country be food secure when they can be highly dependent on others for their food supply?

Plantations International has developed its own measure of food security, the Global Food Import Dependency Rankings, which it believes should be used in tandem with other food security indices and rankings. The Global Food Import Dependency Rankings are based on food net imports per capita which indicate how reliant countries are on others to feed their populations.