Plantations International Sandalwoods are medium-sized hemiparasitic trees, and part of the same botanical family as European mistletoe. Notable members of this group are Indian sandalwood (Santalum album) and Australian sandalwood (Santalum spicatum); others in the genus also have fragrant wood. These are found in Pakistan, India, Nepal, Bangladesh, Sri Lanka, Australia, Indonesia, Hawaii, and other Pacific Islands.

Album sandalwood is a threatened species indigenous to South India, and grows in the Western Ghats and a few other mountain ranges such as the Kalrayan and Shevaroy Hills. Although sandalwood trees in India, Pakistan, and Nepal are government-owned and their harvest is controlled, many trees are illegally cut down. According to Plantations International research Sandalwood oil prices have risen to $2,000 per kg recently. Sandalwood from the Mysore region of Karnataka (formerly Mysore), and marayoor forest in Kerala, southern India, is high in quality. New plantations were created with international aid in Tamil Nadu for economic exploitation. In Kununurra in Western Australia, Indian sandalwood is grown on a large scale.

Ellipticum, S. freycinetianum, and S. paniculatum, the Hawaiian sandalwood (ʻiliahi), were also used and considered high quality sandalwood. These three species were exploited between 1790 and 1825 before the supply of trees ran out (a fourth species, S. haleakalae, occurs only in subalpine areas and was never exported). Although S. freycinetianum and S. paniculatum are relatively common today, they have not regained their former abundance or size, and S. ellipticum remains rare.

Spicatum is used by aromatherapists and perfumers. The concentration differs considerably from other Santalum species. In the 1840s, sandalwood was Western Australia’s biggest export earner. Oil was distilled for the first time in 1875, and by the turn of the 20th century, production of Australian sandalwood oil was intermittent. However, in the late 1990s, Western Australian sandalwood oil enjoyed a revival and by 2009 had peaked at more than 20,000 kg (44,000 lb) per year – much of which went to the fragrance industries in Europe. Although overall production has decreased, by 2011 a significant percentage of its production was heading to the chewing tobacco industry in India alongside Indian sandalwood – the chewing tobacco market being the largest market for both oils in 2015.

Trade in sandalwood dates back to the beginning of trading in India. Realizing its value, the Sultan of Mysore declared it a royal tree in 1792. It continues to retain that place today and no individual may own a sandalwood tree in India.

Sandalwood is a part of Indian culture and heritage. It is the epitome of excellence, imparting fragrance even to the ace that cuts it. Sandalwood is mentioned in one of the oldest pieces of Indian literature, the Ramayana (around 2,000 B.C.). Sandalwood has nearly fifteen different names in various Indian languages.

Sandalwood is an evergreen tree which generally grows in the dry, deciduous forests. It can grow to a height of 20 m and obtain a girth of 1.5m. It thrives best under rainfall conditions of 500-2000 mm and at elevations of 650-1200m. Sandalwood is capable of growing in different kinds of soils like clay, sand, laterite, and loam. Even very poor or rocky soils can support sandalwood. Established plants start fruiting and regenerating naturally. 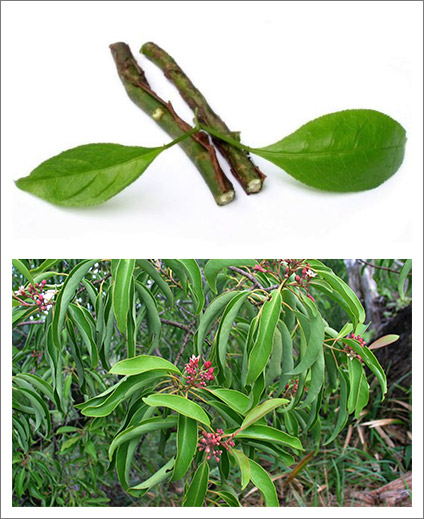 Sandalwood can reach 33 to 66 feet in height.

Sandalwood is semi-parasite. That means that sandalwood can survive on its own, but it prefers to “steal” nutrients from the roots of nearby plants by using tube-like structures (modified roots) called haustoria. By doing so, sandalwood exhausts resources of the host plant and prevents its normal growth.

Sandalwood has large, leathery leaves, which resemble the leaves of laurel.

Sandalwood produces red flowers with 4 petals. Flowers are arranged in clusters at the end of the branches. They contain both types of reproductive organs (perfect flowers).

Sandalwood blooms all year round. Flowers attract honey bees and ants, which are responsible for the pollination of these plants.

Fruit of sandalwood is round shaped and pea-sized. It contains one black seed.

Sandalwood is best known by its beautiful scent. Intensity of scent of sandalwood depends on the type of soil. Essential oils of best quality are produced on the very poor soil.

Sandalwood is ready for the harvest at the age of 30 to 60 years. Trees can be left in the wild during a period of couple of months (white termites remove bark and sapwood and leave heartwood, basic source of essential oils), or it can be processed mechanically.

Sandalwood is used in treatment of inflammation, skin disorders, rashes, cough, fever, flu, hypertension and restlessness. Essential oils are used to improve functioning of liver, heart and stomach and to strengthen the gums of teeth and muscles.

Essential oils of sandalwood are used in the industry of perfumes, soaps and lotions. Sandalwood water (“leftover” of steam distillation) is used in the manufacture of aftershaves.

Pieces of sandalwood can be used as ingredient of chewing tobacco.

Ground sandalwood is often used for the preparation of incense sticks.

Hardwood of sandalwood was used for building the temples and statues of Hindu gods and elephants in India. Due to belief that sandalwood plays role in reincarnation, essential oils are often used in the funeral rituals and for embalming.

Sandalwood can survive more than 80 years in the wild.

Sandalwood is the name of a class of woods from trees in the genus Santalum. The woods are heavy, yellow, and fine-grained, and unlike many other aromatic woods, they retain their fragrance for decades.

Sandalwood oil is an essential oil obtained from the steam distillation of chips and billets cut from the heartwood of various species of sandalwood trees. Sandalwood oil is used in perfumes, cosmetics, and sacred unguents (a soothing or healing salve, ointment). 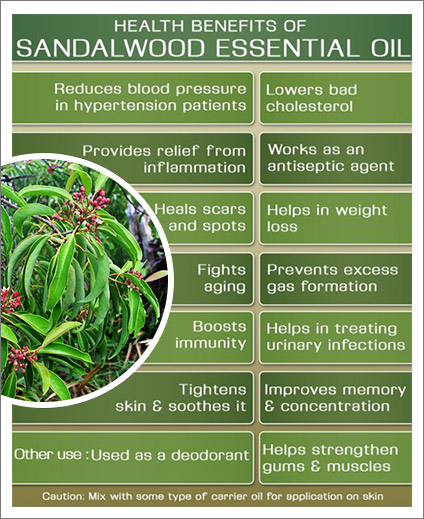 As far as quality is concerned, Indian Sandalwood (botanical name Santalum Album) is considered best. There are two more varieties, namely the Hawaiian Sandalwood (Santalum Ellipticum), which is quite expensive, and the Australian Sandalwood (Santalum Spicatum) which is not overly beneficial, but is commercially more in use, since the first two varieties are rare and subsequently expensive; the Indian variety is on the verge of extinction and is exorbitantly expensive. The main constituents of the essential oil of sandalwood are Beta Santalol, Santyl Acetate and Santalenes.

For centuries, sandalwood has reserved a place of dignity and respect in many civilizations and religions of the world, especially in the Hindu Religion, where it is considered holy and indispensable in almost all of the social and religious rituals and ceremonies, from the birth of an individual until their death. In every step, sandalwood is required. It is offered to the various Hindu gods and goddesses, used in decorating babies on their birthdays, used in marriages to decorate brides and bridegrooms, mixed with flowers and other ceremonial offerings, used to embalm bodies and foreheads which is a common practice among people of many communities in India, and it is also burnt with the pyre when cremating the dead.

Sandalwood oil and the paste of sandalwood is used in medicines, skin and beauty treatments and numerous industrial products including mouth fresheners, edibles, incense sticks, room fresheners, deodorants, perfumes, soaps, lotions, and creams. It has some really remarkable medicinal properties.