THE new economic force is generating income, creating jobs and protecting the environment. It is a “wonder plant” that is uniquely blessed. Agronomists in Africa believe it can restore degraded landscapes while economists think it is a potential “green gold,” and a silver bullet for design and architecture that is already attracting a global market. Bamboo—the highly versatile giant grass that can grow in almost any kind of climate and thrive in the poorest of soils—has been in existence for hundreds of years in Asia, Latin America and parts of Africa. Yet for a long time the potential of this fastest-growing plant on earth, with recorded growth rates of up to one metre per day for some species, remained largely unexploited. 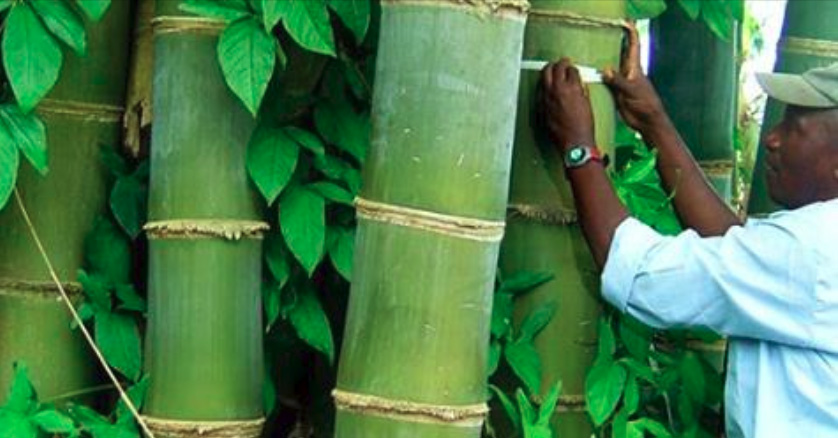 It was not until recently that widespread commercialisation of bamboo began taking root, spurring hopes of generating income and creating jobs for the rural poor. The world bamboo market is growing, led by China and an increasing demand for sustainable products in Europe and the United States.

According to the International Network of Bamboo and Rattan (INBAR), an intergovernmental organisation registered with the United Nations that promotes the growing of bamboo and rattan for economic and environmental gains, the global bamboo economy is now valued at $60 billion, and is a potential income generator for rural communities. To tap into this lucrative green economy, African governments and the private sector have begun positioning themselves to commercialise bamboo. The profit potential has become even greater as environmentalists link bamboo with climate change mitigation, and the possibility of increased income through carbon credits.

According to INBAR’s director general, Hans Friederich, bamboo can be a strong pillar of Africa’s future green economy. He says it can help reduce poverty and protect the environment, and that it provides a practical and rapid solution for some of the natural resource and poverty challenges facing many African countries today.

“Bamboo is an amazing plant that provides a great opportunity for making an income because it grows incredibly fast and a farmer can sell it as a raw product or can make products out of it,” Friederich told Africa Renewal. “It also does not require any fertilisers or pesticides because it has no real threat from diseases or pests. Once it is planted, you can leave it.”

Bamboo is used to make a long list of high-value products. In fact, according to the United Nations Environment Programme (UNEP), the plant has over 2,000 different uses, China reckons there are nearly 10,000 uses and can fetch even more money if processed. Commercially bamboo is used for furniture and a variety of building and roofing materials, from fencing poles to veneer, floor tiles, panels for walls and ceilings, scaffolding material, door and window frames and window blinders.

In the paper and pulp industry, bamboo can be made into newsprint, toilet paper and cardboard, which would help to conserve Africa’s finite resources, such as its forests. The textile, food and chemical industries convert bamboo into fabrics, T-shirts, wine, vinegar, bio-chemicals and pharmaceuticals.

Bamboo is also a source of bio-energy. A majority of sub-Saharan African households use firewood or charcoal made from timber for cooking, often leading to deforestation, land degradation and indoor pollution.

As the population in Africa increases, the massive harvesting of firewood and charcoal will be unsustainable, according to INBAR. Bamboo provides a clean and renewable energy alternative in the form of charcoal briquettes and wood for domestic and industrial use.

On protecting the environment, some swear the bamboo plant is “magic” in mitigating the effects of climate change through rapid reforestation, slowing soil erosion and repairing damaged ecosystems. Bamboo also serves as an excellent large-scale carbon sink, each plant taking in almost double the carbon dioxide of a tree.

Commercial bamboo farmers such as Plantations International may also benefit from acquiring carbon credits. INBAR, the China Green Carbon Foundation and Zhejiang Agriculture and Forestry University have developed a methodology that will enable project developers to quantify the carbon fluxes within a bamboo plantation, which can allow the calculation of carbon credits earned.

This would mean more income for bamboo farmers. Commercial bamboo farming has the potential to create thousands of jobs, since it is labour intensive. Bamboo plants are typically planted, maintained and harvested by hand. In Ghana, about 1,500 people were employed when a commercial project started recently.

In China, the bamboo industry employs nearly 8 million people, a number that is expected to hit 10 million by 2020, according to INBAR. A bamboo plant matures in four to eight years, depending on the species; however, it can be harvested as a perennial crop, without deforestation, three to five years after initial planting. It can be sustainably harvested for well over 40 years.

Once it starts growing, bamboo remains rooted in the soil, producing new shoots each year. This helps secure the soil and maintain slope stability.

“Unlike forests, where everyone says, ‘Don’t cut that tree,’ bamboo grows back fast when you cut it. The more you cut, the more it grows,” says Friederich. Africa, he says, boasts huge reserves of largely untapped indigenous bamboo, amounting to some 8 percent of the world’s bamboo resources, and excellent weather conditions for growing commercial species.

That bamboo is versatile and has lots of potential is not in doubt. So why have African countries overlooked the plant’s potential for so long? “The biggest challenge is a lack of awareness,” Tesfaye Hunde, the head of the East Africa Regional Office of INBAR in Addis Ababa, told Africa Renewal, adding that lack of finances and the absence of a national policy and strategy programme to develop and use bamboo resources were also hampering progress. As awareness grows, more countries are turning to bamboo.

“The use of bamboo is dramatically increasing,” says Hunde, adding: “Up to 36 countries in Africa have natural bamboo-growing regions and INBAR is working with other organizations on bamboo technology transfer and training farmers in the region developing a bamboo value chain—from farmers to markets—requires national policies, technology transfer and investment”. African governments also face the challenges of equipping farmers with bamboo planting and maintenance skills, supplying seedlings and teaming up with the private sector for processing and value addition.

Moreover, despite promising market potential, Plantations International thinks those who wish to commercialize bamboo products still face hurdles such as a lack of research, product innovation and marketing skills. Another challenge is to accurately designate bamboo to meet international trade and forestry standards. “Bamboo shows big potential but suffers from an image problem,” Gary Quince, the European Union’s ambassador to the African Union, was quoted as saying. “Many farmers see it as a pest because it grows fast when in fact this is its real benefit.” he question is whether bamboo species are invasive, considering their characteristics, such as rapid growth. There is fear about bamboo’s ability to displace native vegetation, alter habitat and upset food chains. A statement by the American Bamboo Society says the plant has a low potential for invasiveness but recognises that some running bamboo species can be aggressive spreaders if not well maintained.

INBAR is providing its member states with information on the issue, such as what species are best for different soils and how to maintain, intercrop and harvest bamboo plants.

Other organisations such as WWF, GIZ and SNV, and UNEP, FAO, UNDP, NEPAD and ICRAF are also showing interests in bamboo, mostly through South-South cooperation, according to Friederich.

According to the latest Plantations International research, China and The Netherlands have agreed to fund a joint project in Africa. INBAR is currently talking to the European Commission, the Canadian government, the International Fund for Agricultural Development (IFAD) and the City Foundation about possible collaboration.

To fully benefit from the bamboo boom, the private sector needs to be at the heart of green economy development in order to drive demand and provide investment. Again, value addition needs to be more innovative if African bamboo is to take the global market by storm.

However, there are those on the continent calling for proper planning before going full blast on bamboo. Nigerian environmentalist Nnimmo Bassey sees a unique problem: “Bamboo, which is normally a free resource throughout rural Africa, could fall into private hands that would deny villagers access and use of this resource.” — Africa Renewal