The Secret Agarwood Treasure of Vietnam

The Secret Agarwood Treasure of Vietnam

Plantations International is investigating a rumor has been spread out that two men in Bo Trach district in Quang Binh province accidentally found an Agarwood treasure in the Phong Nha – Ke Bang National Park.

However, Professor Phan Truong Thi, Head of the Gemstone and Jewelries Institute, has denied the possibility of the existence of an Agarwood treasure in nature. Therefore, he keeps doubts about the value of the Agarwood treasure and the sums of money the two men and others got from selling Agarwood they dug. 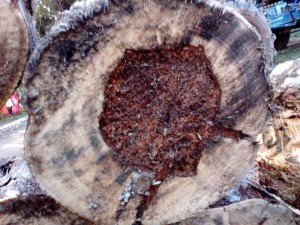 Also according to Thi, Agarwood grows in the wild like many other flora species. These trees are moderately tall and big, and there must not be any tree as big as century-old baninan trees as rumored.

He also said that no one would store Agarwood under the earth.

Agarwood has the two most important values. Its barks can be used as the material to make incenses. The timber can be used for interior decoration at luxurious hotels or villas. In the past, it was once used to make coffin for the kings, because its fragrance existed forever.

The Agarwood discovered by the two men in the Phong Nha – Ke Bang National Park, therefore, could be the place where someone hid the Agarwood he found somewhere before.

Nevertheless, the Agarwood must not be here for too long. Agarwood is a kind of normal wood. Therefore, it would get decayed after 5 years of being kept under the earth. Agarwood would not exist for more than 10 years. In order to protect Agarwood, people have to apply special technique to preserve it. For example, Agarwood is put amid many different clay layers.

In Vietnam, the trees have been mostly found in the forests in the west or the central region that borders Laos – the areas which still have not born the influence from human’s activities. Natural Agarwood can also exist on high mountainous areas. However, the number of trees still exist in the wild is modest. Someone might think that this was an ideal place to hide Agarwood, because this was the area with high mountains and holes and burrows.

The stories related about the people who luckily found Agarwood all say that the people had to go tough roads to find the special trees. Experienced people might find Agarwood when considering the leaves or the odor from barks. However, since the trees are rare in the wild, it’s very difficult to find them in the forests.
Also according to Thi, scientists have successfully created the aromatic spices with the similar odor. However, the artificial odor is not as good as the odor of the natural Agarwood.

At some production workshops, real Agarwood may be mixed with some kinds of aromatic spices. However, the odor just can exist for a short time, while Agarwood fragrance is believed to last forever. Pine wood has also been used to counterfeit Agarwood.

Nguyen Hoai Nam, Head of the Tro Moong Forest Ranger Unit said that after hearing the news about the two men who discovered an Agarwood treasure worth multi billions of dong, people flocked to the forests to look for Agarwood. However, forest rangers have been put at the entrance gates to the forests to stop them.