Precision Farming is the Future of Food Production

Precision Farming is the Future of Food Production

We are all familiar with rice, oil palm, rubber and durian. Rubber is grown for rubber latex, which finds wide use in thousands of products that have served us all well. 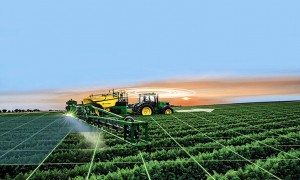 The oil palm is the nation’s golden crop, bringing in around RM80 billion each year. Although about 80 per cent of palm oil end up as food, a significant 20 per cent drive the growing oleochemicals market. With the world’s growing preference for renewable chemicals, it is only a matter of time before palm-based chemicals replaced fossil-based petrochemicals.

Rice is a staple food. Many cannot go without rice at least once a day. In Kelantan and Kedah, the two major rice-growing states, it is common to see people taking rice for breakfast, lunch and dinner. That explains why rice is at the top of the food security agenda. Despite attempts to be self-sufficient in rice production, we have achieved only a 70 per cent capacity.

Durian, especially Musang King Durian, is the new agricultural sensation. Lately, there has been a scramble to produce Musang King Durian to meet the Durian export demands of countries like China. Consumers in the West have yet to develop a liking for the heavenly taste of durian. Many believe once the durian craze hits the West, it may even overtake palm oil as the new darling of the nation’s agriculture economy.

There is no denying the important role of agriculture in fueling global business. At the same time, agriculture is not free from challenges that threaten its sustained growth. A major challenge concerns the rising global demand for food as the world population inches upward, approaching eight billion.

As the world economies continue to witness encouraging growth, the improved purchasing power of the people has led to rise in the per capita demand for food. Such escalation in demand has put pressures on world agriculture to improve its productivity.

While the world witnesses a ballooning in the global food demand, agriculture faces another challenge of securing land to grow the crops. An increase in greenhouse gases has created challenges as world agriculture strives to expand production.

There has also been concern raised by civil societies about the negative impact of agriculture on the environment. This further rattles the world agriculture, where the pressures for drastic change in the traditional agricultural practices have been growing.

Questions have been raised about the inefficient and potentially damaging practices of fertilization and pest management in agriculture. The processing of agricultural products has come under criticism because of the wastes and residues, which, if left untreated, can be polluting.

Labour, especially shortages, is another growing concern. It has been reported that oil palm plantations in Malaysia face an acute labour shortage, which has left many palm fruits unharvested, negating efforts to increase productivity.

With the advent of urban agriculture, where management control is more technology-driven, a global rise in precision farming will soon be inevitable worldwide. Many are convinced that no agriculture sector will be spared from Industrial Revolution 4.0 technologies.