Known for his love for the king of fruit, China’s ambassador to Malaysia Bai Tian took to Douyin to promote the famed Musang King durian.

Dubbed “the ambassador with the greatest love for durian” and “the best durian promoter”, he released a 90-second long video praising the fruit, from its appearance to the taste and characteristics.

“The truth is, it’s very delicious!” lauded Bai in a video posted on the embassy’s Douyin (the Chinese version of TikTok) account on Sunday.

It garnered over 4,600 likes and interest among users, who said that they can’t wait to fly over to Malaysia for a “Musing King feast”. 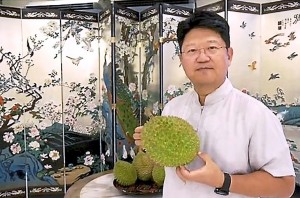 In the video, Bai began by asking what one would think of Malaysia, and since it was June, it had to be durian for durian lovers in the mainland. He said that Malaysian durians are produced almost all over the country with over 20 varieties available.

“And the most prestigious is the Musang King, which I will introduce to you today, ” he said, adding that Malaysian durians went through the natural ripening and shedding process, giving it the delicate and full-bodied flesh.

He also explained how to identify the Musang King Durian.

“The Musang King Durian is generally small in size, with relatively short and thick spikes. The most important feature is that it usually has the shape of a five-pointed star at the bottom. The flesh is golden or ginger-yellow in colour and it tastes delicate, dense, sweet and mildly bitter, with a strong and sweet aroma, ” he said.

“I hope that after the epidemic, everyone will find the opportunity to take a look and visit this beautiful country of Malaysia and visit my Agroforestry Group, ” he said.

Since taking office in 2018, Bai has been promoting the fruit of his love in a creative way every year during the high season.

After a month into his appointment as the ambassador, Bai visited the durian orchards in Bentong accompanied by Datuk Seri Liow Tiong Lai, who is former Bentong MP and the then MCA president.